After completing the drama, this is what going through my mind: “This drama definitely needs a sequel.”

The staged terrorist attack masked as a plane system failure and took away more than 200 lives which majority consist of primary school students. On board, Cha Hoon is one of the school of kids heading to Morocco for a competition.

Hoon recorded a video for his only kin uncle to apologies for their argument and to ask him take care. Through the last video, Cha Dal Geon (Lee Seung Gi) saw the face of a mysterious man that survived the crash and he knew it is not just a plane system failure.

No one believes you

Go Hae Ri (Bae Suzy) is a special agent from National Intelligence Service (NIS), a government body, was ordered to undercover and take care of the families during their trip to Morocco.

Dal Geon informed everyone his suspicion but no one believe him. The stuntman turns into an awaken tiger and go after the mysterious man who he chance upon in the airport. 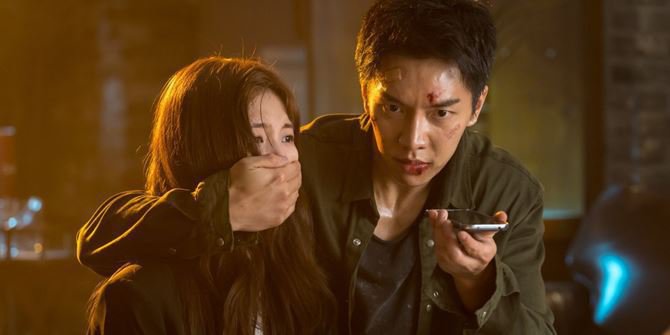 NIS agent identity was exposed, Dal Geon naturally grab the chance to further investigate the crash with Hae Ri who is dying to head back Korea to work. Both of them found out that Kim Woo Gi (Jang Hyuk Jin), the pilot is alive and decide to hunt for him.

The case is like an onion. More layers of truth starts to reveal, it stings you but you still want to get to the bottom of it. Sniper was hired to kill the innocent, Lily (Park Ah In) is a profession killer that helps Jessica (Moon Jung Hee) who is the Asia’s representation of John & Mark.

The powerful group, John & Mark, even place people in NIS the government body to prevent Kim Woo Gi from returning to Korea to testify.

Romance bubbling on the way back to +82

Every HI-5 they have increase the closeness.

Finally back home safely with the criminal. The case is closed and truth is revealed to the public.

The bad and worst

Just when you thought every thing ended, it is just the beginning of an even bigger power and authority behind. John & Mark is ruthless, but they are not the worst. They are powerful enough to pull the president down from his chair and the entire nation cheer for it.

NIS was forced to shut down which left the few righteous agent no power and rights to further investigate. Dal Geon believe to be killed in the plot bomb which left Hae Ri devastated yet more motivated to find out who is “Samuel”.

Hae Ri went on to investigate as an individual and went on with Jessica. While Dal Geon managed to make his way into the mysterious company, Black Sun, to seek truth.

The open ending left everyone hanging. Good news is, the production team announce that there is a possibility of Season 2.